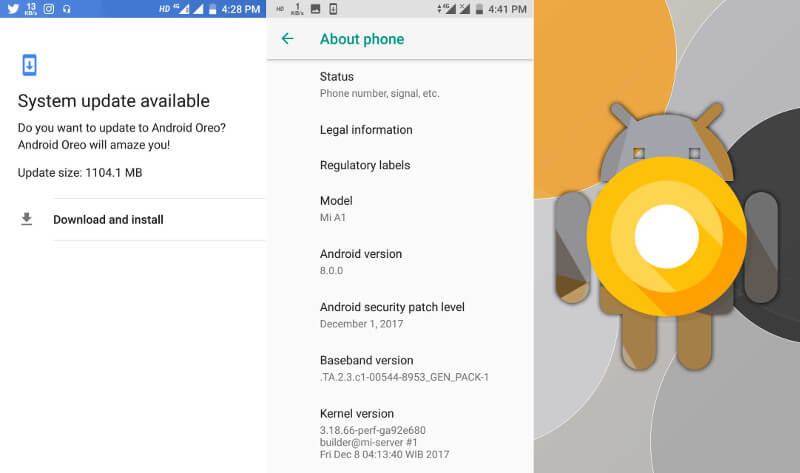 Xiaomi Mi A1 is the Android One smartphone launched in collaboration with Google. The device runs on stock Android 7.1 Nougat out of the box. As it is an Android One device, the company promised to roll out Android 8.0 Oreo update and it will also among the first devices to get Android P update. Regarding this, Xiaomi started recruitment for Mi A1 Android Oreo beta testers though Mi Community India and MIUI Global Forum.

Today, Xiaomi has ended recruitment and started rolling out Android 8.0 Oreo beta update to the selected Mi A1 users. If you’ve applied for the Oreo beta update, then you’ll soon see an update notification on your device. It is about 1.1GB in size and brings an Android security update for December 2017. If no bugs are reported, the same update will be pushed to all Xiaomi Mi A1 users in the coming weeks.

To remind you, Xiaomi Mi A1 features a 5.5-inch Full HD display and is powered by a 2GHz Octa-Core Snapdragon 625 processor coupled with Adreno 506 GPU and 4GB of RAM. It has 64GB of internal storage and hybrid dual SIM support. Other specifications of Mi A1 includes 12MP + 12MP dual rear cameras, 5MP front camera, fingerprint sensor, and a 3080mAh battery. The device got a permanent price cut in India, now available for just Rs. 13,999.