Yesterday, Xiaomi officially confirmed the launch of its flagship smartphone, the Xiaomi Mi 8 to celebrate its 8th-anniversary at its May 31 event on China. Alongside the flagship device, the company might also announce several new products & accessories including the Mi Band 3 at the same launch event. Today, a new official new has surfaced online on Weibo stating the announcement of Xiaomi’s latest iteration of MIUI version i.e. the MIUI 10 along with the Mi 8 flagship.

It seems that the Xiaomi Mi 8 could become the first company handset to come preinstalled with the MIUI 10. Last year, Xiaomi at the announcement of MIUI 9 claim that it is as fast as lighting and today the below poster says that the MIUI 10 will be faster than lightning. No doubtfully, the MIUI 10 provides better performance than the MIUI 9. To provide better experience, Xiaomi also suspended further MIUI updates for few of its devices. 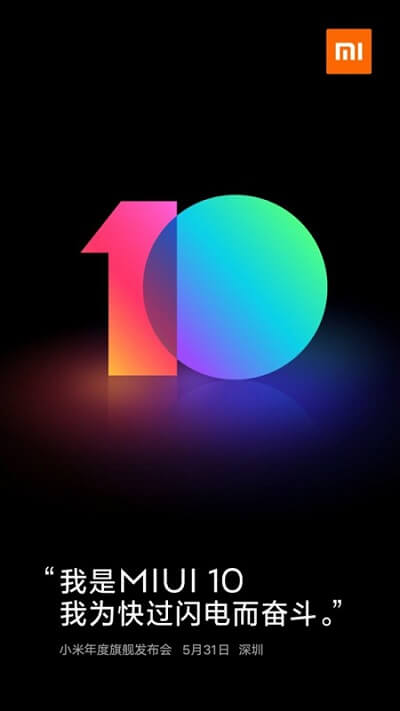 However, the Chinese smartphone giant doesn’t revealed the features it’s going to include in the MIUI 10. But, like its previous MIUI versions, users can expect new themes, wallpapers, revamped Notification panel & Settings app, and better battery performance. The complete changelog will only available once the MIUI 10 goes official next Thursday.

Xiaomi’s flagship models including Mi 6, Mi Mix 2, Mi Mix 2S, Mi 5, and others could be first in the list to get MIUI 10 update followed by other mid-range & low-end models including Redmi Note 5 Pro, Redmi 4, Mi Max 2, Redmi Y1 Lite, Redmi S2, and others. You can check complete list of MIUI 10 Update Eligible Devices.

Stay tuned as we’ll update the MIUI 10 OTA Update roadmap once it goes official on May 31.