People Album and baby album are the two new features found on Xiaomi mobiles running on MIUI 7 OS. As of now only Redmi Note 2 Prime, Redmi Note 2, and Mi4c runs on stable MIUI 7 OS. So, users of these smartphones will notice people album under Gallery which was absence in MIUI 6. Xiaomi phones running on MIUI 7 based custom ROM can also enjoy the new Gallery Face Detection feature. To get detailed overview of these albums, here below is the complete tutorial. 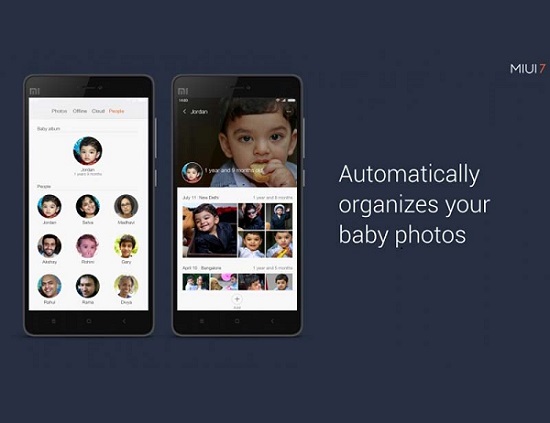 What is People Album?

People Album is the latest feature included by Xiaomi in its MIUI 7 ROM. It is the last tab under Galley app just beside the Cloud album. Under People Album, each and every recognized individual will be showed in a round avatar. It the Mi Cloud which activates the face detection process and lets you recognise tons of photos from Mi Cloud and Gallery. So, this people showed in round avatar are to be named and then your device will do the rest.

Follow the below steps to activate and use People Album-

How to create and use People Album on Xiaomi MIUI 7 smartphones: 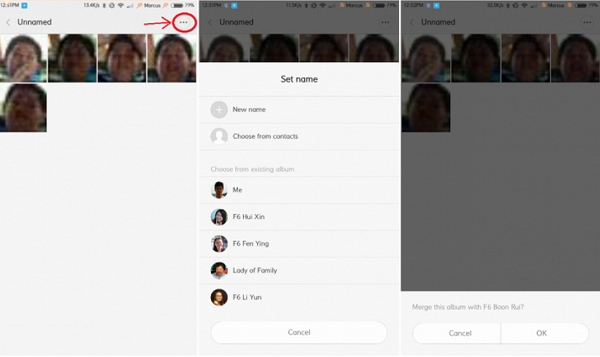 1. Firstly we have to add a specified name for the “Unnamed” person under People Album. So, go to people album > tap on three dots icon > add name of the person.

2. Now you have to manually merge the person as sometimes the device shows two different avatar of same person. Follow below to merge albums-

What is Baby Album?

Baby album is another awesome feature of MIUI 7. Parents will really like the Xiaomi phones after referring this awesome feature. Here, parents can maintain a separate photo album for their beloved child for easy and fast overview. Whenever you take a photo of your baby, it will be automatically synced and shown in your album. The photos in the albums will be shown as exclusively timeline format for a better experience. It also has the option to create a shortcut of your baby album directly to the home screen. Refer below to use baby album on your Xiaomi Android smartphone

How to create and use Baby Album on Xiaomi MIUI 7 smartphones: 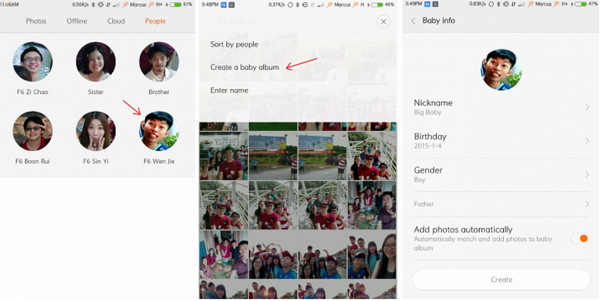 Select a person from the people album and tap on the three dots icon located on the top right corner of the screen. There select the option “Create a baby album”. In the next screen, we have to fill out the details of the baby like Nickname, birthday, Gender, relationship with him and also check the “add photos automatically tab”.

So, that’s all about MIUI 7 baby album and people album features, tips and tricks.