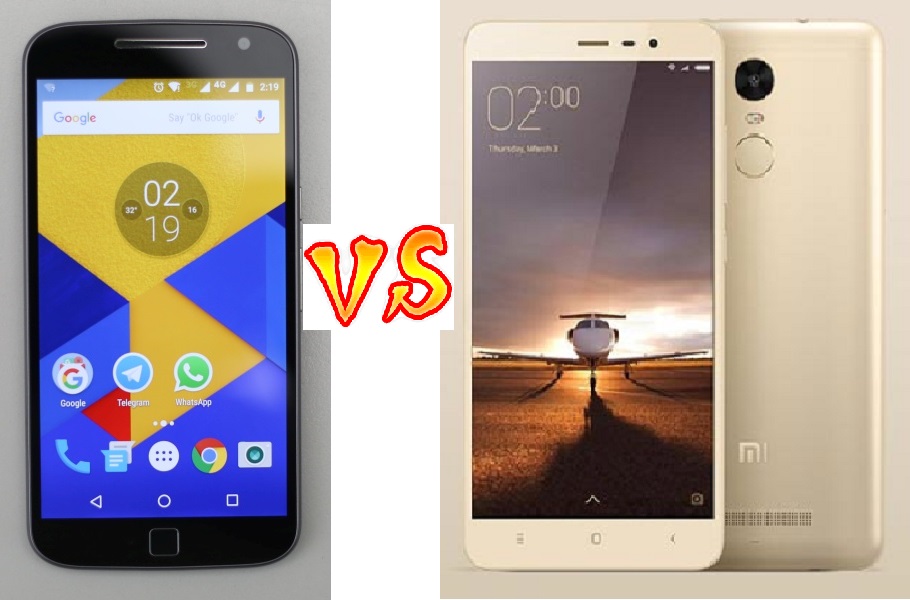 Motorola today announced two new smartphones – the Moto G4 and Moto G4 Plus at a special event in India. Both the devices shares some common specs like 5.5-inch Full HD display with Corning Gorilla Glass 3 protection, powered with octa-core Snapdragon 617 SoC, runs on Android 6.0.1 Marshmallow, 3000mAh battery with Turbo Charging and a 5 megapixels front facing camera. With such specs & features, the Moto G4 Plus will be a direct competitor to Xiaomi Redmi Note 3 which has a sales number of 6,00,000 units in just two months. This feature talks a lot about the success of Redmi Note 3 smartphone in the Indian market. In this post, we will be comparing the screen size, battery, software, cameras, and storage of Moto G4 Plus vs Redmi Note 3.

Both the Moto G4 Plus and Redmi Note 3 shares most of the similar features including 5.5-inch HD display, 3GB RAM, 32GB internal storage (expandable with microSD card), fingerprint scanner, 16MP rear camera, 5MP front camera, and 4G LTE connectivity. The G4 Plus fingerprint sensor can unlock the phone in less than 750 milliseconds. It also has swipe to unlock, swipe to dismiss, and water repellent nano-coating feature.

For complete comparison overview of Moto G4 Plus vs Redmi Note 3, do refer the following table –

Moto G4 Plus vs Redmi Note 3

Conclusion: If your budget is limited to Rs. 12,000, then Xiaomi Redmi Note 3 is the best one to go else purchase the Moto G4 Plus which gets latest Android updates.