There were already rumors & leaks regarding WhatsApp Video Call feature, but today with the roll of WhatsApp Video Call 20.16.80 beat version APK confirms the release. This version of WhatsApp has the similar UI compared to the previous version but the tap on the Call options gives two options to choose from a video call or a voice call. As it is a beta version, users may not find all the features. Though the video call feature is expected to hit Apple iOS devices first, we are seeing the beta version for Android devices. Coming to the roll out plans, WhatsApp might release the update in phases just similar to that of voice calling feature.

Users will not find any difference in the calling icon, but by tapping on it will ask whether to make voice call or video call. As the feature is still not activated, you will see the message “Couldn’t place call” when you try to make video calls. It is expected the feature will be soon activated in the WhatsApp upcoming beta updates. Apart from this, we might also see Call Back and Voice Mail features being integrated in the next Beta roll out. 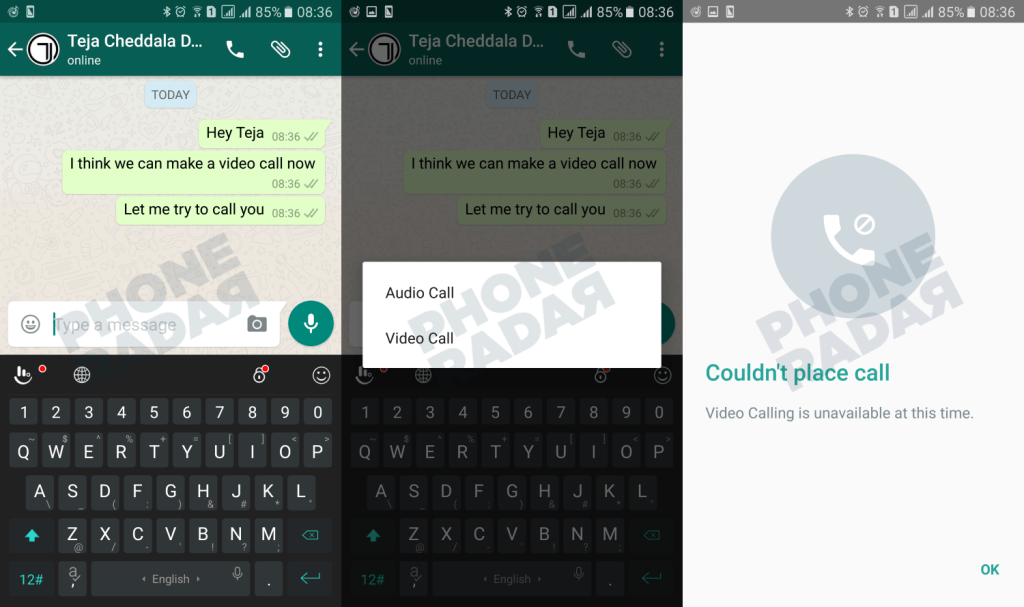 Hope this time WhatsApp doesn’t implement silly invite-based system where a user need to get video call from those who already had the feature. This was really frustrating for most of the users who were eagerly waiting for the voice calling feature.

Recently, WhatsApp released the desktop apps for Windows & Mac, while the document sharing feature is made available for web where you can share different files like CSV, DOC, DOCX, PDF, TXT, XLS, XLSX and more. Stay connected as we will update once the WhatsApp Voice Calling has a public roll out.