Xiaomi Mobiles has scheduled a special event on October 19th for which the company already started sending press invites. The below image of invite teaser reveals a new product launch in the next upcoming Monday. The company has not enclosed any details regarding the new launch.

The most expected device to be unveiled at the event is “Xiaomi mi5” which already has many rumors and leaks in the last few days. But the previous reports claims that the device will be launched either in November or December, however the October launch will be more surprising. 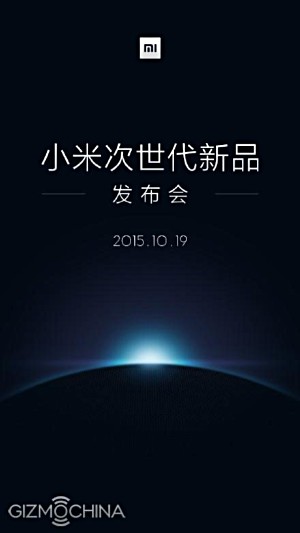 If Xiaomi Mi5 is the device to be unveiled at the event, then it won’t include Snapdragon 820 SoC as the chipset will be available to different devices starting from December.

Another possibilities we can see is a 2nd generation Xiaomi Mi Pad 2 or a Xiaomi laptop computer. The earlier reports claims that the Mi Pad 2, the successor of Mi Pad will be announced in Q3 of 2015. Xiaomi never confirmed the release date of Mi Pad 2, so we can expect the latest generation of Mi Pad being announced at the event. The tablet was being spotted on China’s 3C Certification center website.

Since only 7 days for the launch event, we can expect more teasers being made official in the next couple of days. Stay tuned!