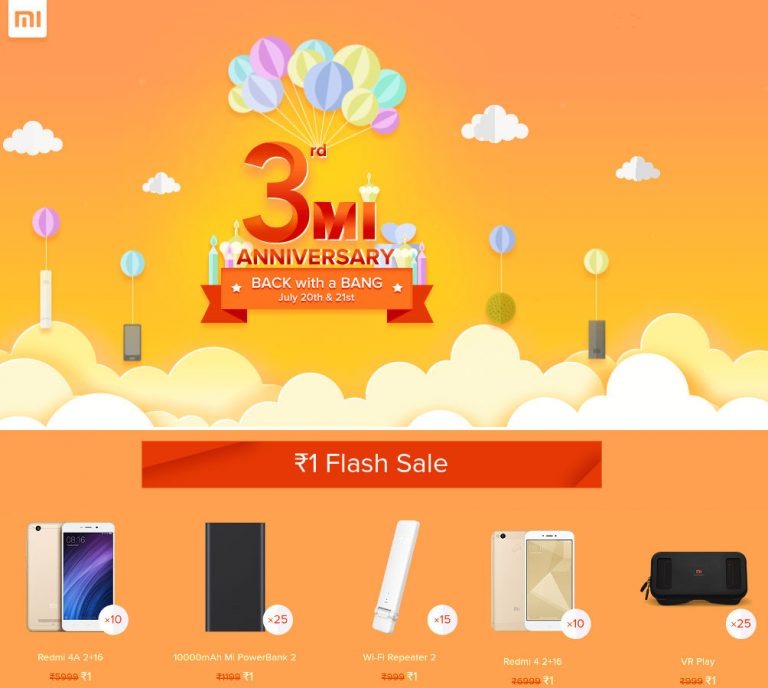 Xiaomi India yesterday announced its latest phablet dubbed as Mi Max 2 at an event held in New Delhi. The device is the successor of last year’s Mi Max with improvement in hardware and design. Alongside the Mi Max 2 launch, Xiaomi also announced that it will be conducting its third Mi anniversary sale in India on July 20 and July 21. During this two days sale, Xiaomi will be providing great deals including discounts on its products, accessories and also host flash sales where users try their luck to get smartphones and accessories for just Re. 1.

Furthermore, users also have chance to win discount coupons which can be applied on various range of Xiaomi products. These coupons can be won by playing a game on official mi website. During the two day Mi 3rd anniversary sale, you will also see Xiaomi Mi Max 2 going on sale for the first time in India. Pricing just Rs. 16,999, the device packs with some top notch specs including 6.44-inch Full HD display, 4GB RAM, 64GB storage, and a massive 5,000 mAh battery. The following are few more deals offered by Xiaomi during its third Mi anniversary sale in India. Also Xiaomi Mi5X – First phone with MIUI 9 to launch on July 26

Xiaomi will conduct Re 1 flash sale on July 20 and July 21 from 11 AM. During the flash sale, there will be 10 units of Redmi 4A, 25 units of 10000mAh Mi PowerBank 2, and 15 units of Wi-Fi Repeater which can be grab for just Re. 1. As this is a limited stock, users have to be very quick in placing the order within a stipulated time. To make you eligible for flash sale, make sure to share this information with your friends and relatives on social media like Facebook.

Redmi 4, Redmi 4A and Redmi Note 4 with huge Stock

During the two day sale, the Redmi 4, Redmi 4A, and Redmi Note 4 will-up for grab with huge stock. These are currently Xiaomi best-selling Android smartphones available in the market. Most of you fails to order during weekly flash sales, but here’s another chance for you. Xiaomi Redmi 4A is priced at Rs. 5,999 while the Redmi Note 4 and Redmi 4 price starts from Rs. 9,999 and Rs. 6,999 respectively.