Xiaomi already confirmed the launch of its latest flagship, the Xiaomi Mi Mix 2 on September 11. Although the launch date is little far from now, we have a fair idea about its design and specs, thanks to timely leaks and rumors. Today, more details about Xiaomi Mi Mix 2 has been surfaced online which reveals the chipset and software version.

Two images have been spotted on a Weibo post revealing the specs sheet of the smartphone. Starting from the processor, the Xiaomi Mi Mix 2 is listed to feature a Snapdragon 836 octa-core processor coupled with Adreno 540 GPU. Even the upcoming Google Pixel 2 and Pixel XL 2 are rumored to include the same chipset. 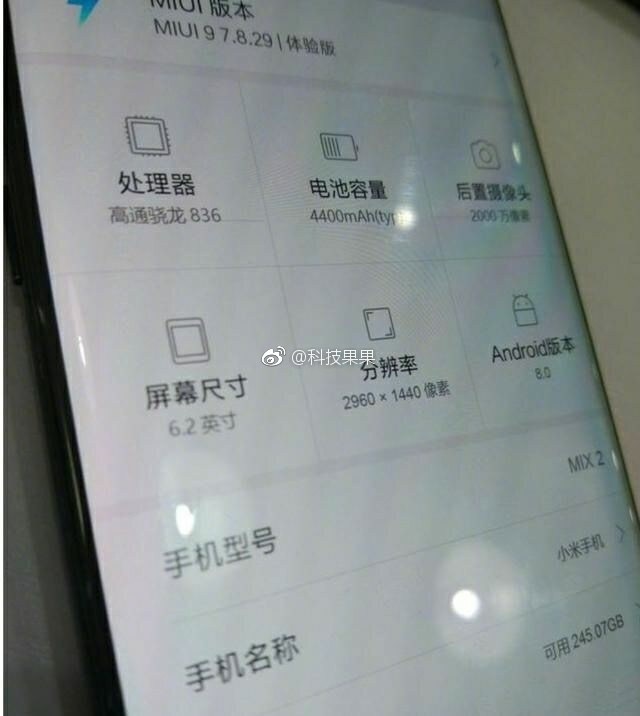 More importantly, the Xiaomi Mi Mix 2 is mentioned to run on the latest Android 8.0 Oreo out of the box. Like other Chinese smartphone vendors, Xiaomi is among those not updating its devices regularly. Just a month ago, Xiaomi has started rolling out Android 7.0 Nougat update for selected devices. Most of the updates of Xiaomi phones are based on its own custom MIUI skin.

The leak images of device specifications also reveals 6.2-inch display with 2960 x 1440 pixels resolution, a 20-megapixels rear-facing camera, 6GB of RAM, and 256GB internal storage. It will also pack with a 4,400mAh battery which is well enough to provide backup for an entire day.

Since it’s only 10 days left for the official announcement of Xiaomi Mi Mix 2, we can expect more leaks in the coming days. Stay tuned!