Xiaomi, last month announced two new smartphones in China – the Mi Mix and Mi Note 2. The Mi Mix features a 6.4-inch bezel-less display with a 91.3 percent screen-to-body ratio. Considering to a new leak, Xiaomi is currently working on another smartphone which could be launched soon this year. 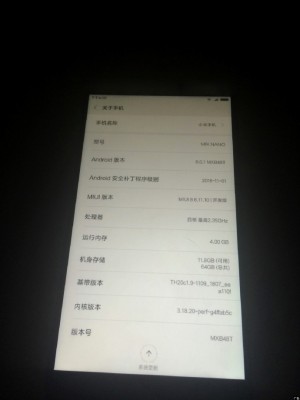 According to a Chinese tipster, Xiaomi Mi Mix Nano could be the upcoming smartphone in the Mi Mix series line-up. Related to this, an image has been leaked online which reveals hardware and software of the device.

It is said that the little brother of Mi Mix will feature a 5.5-inch display and is powered by a Qualcomm Snapdragon 821 processor. It runs on Android 6.0 Marshmallow and has 64GB of internal storage coupled with 4GB of RAM for better multi-tasking. The handset is expected to price CNY 3,000 which converts to Rs. 30,000 Indian rupees (approx.).

As there is nothing official from Xiaomi regrading Mi Mix Nano, it is advisable for all the readers to take the above leaks and rumours as pinch of salt. Stay tuned as we will update once anything is revealed about the device.