Xiaomi Mi5S, the successor of Mi5 has been spotted on AnTuTu benchmark. According to the listing, it includes some high-end specs like Qualcomm Snapdragon 821 chipset coupled with Adreno 530 GPU. Earlier the Mi5S already passed the Chinese 3C regulatory body. 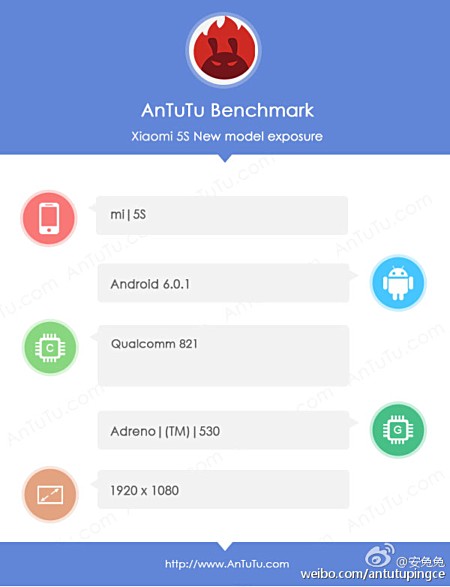 It also shows that the device will sport a 5.15-inch display with 1920 x 1080 pixels screen resolution and runs on Android 6.0.1 Marshmallow out-of-the-box. On the storage front, it shows a massive 6GB RAM for quick multi-tasking and has 256GB of internal storage. Just similar to Xiaomi Mi5, the Mi5S could also come in different storage variants.

Coming to the benchmark scores, it has successfully reached around 150K points which indicates a powerful hardware. As of now, these are the only details surfaced through benchmark listing but considering the earlier leaks, the Mi5S will sport a 16MP rear camera and a 3,490mAh battery.

There is no details available regarding the price, launch date, and other specifications of Xiaomi Mi5S. We’ll update once there is official confirmation from Xiaomi.