Xiaomi has made official the date of its upcoming event where its latest budget Android smartphone, the Redmi 4 will be announced. It will be the successor of Redmi 3 device that was launched back in January this year. The Xiaomi Redmi 4 already received China’s TENAA certification in the past that reveals basic-specs and design. 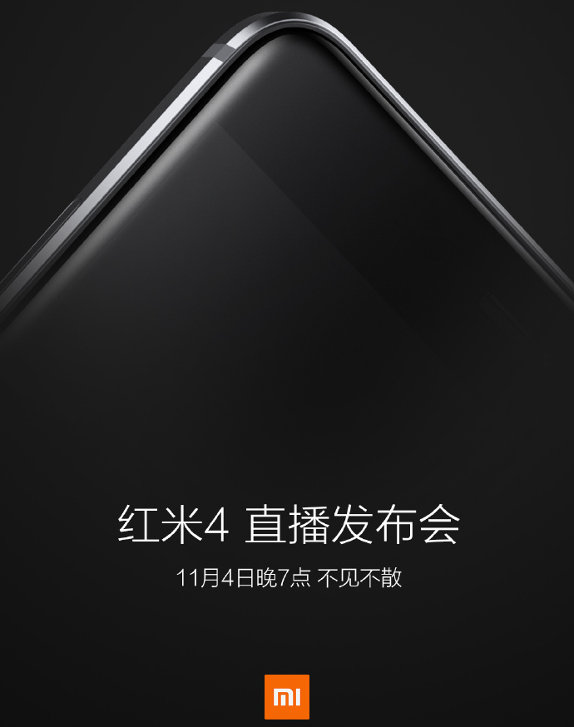 The launch teaser of Redmi 4 has been post on Xiaomi’s Redmi Weibo channel with complete event details. The smartphone is scheduled to launch at 7pm CST (4:30pm IST) on November 4 and the event will be live steamed. It is also expected that Xiaomi could launch Redmi 4A, the cheaper variant at the same launch event.

The below is the teaser image of launch event which doesn’t reveal much about the Redmi 4 smartphone, beyond what we can see is the metal frame and curved display glass.

Considering the previous leaks & rumours, the Redmi 4 could feature a 5-inch 1080p touchscreen, is powered with a Qualcomm Chipset with an octa-core CPU, a 13-megapixels rear camera with dual-LED flash, a 5-megapixels front camera and a massive 4,000mAh battery on the back.

It will run on latest MIUI version with Android 6.0 Marshmallow on top and has 3GB RAM coupled with 32GB inbuilt memory expandable with microSD card. Just similar to its predecessor (Redmi 3), it also features fingerprint scanner on the back and has dual-hybrid SIM support.

The Redmi 4 is expected to launch in three different colors i.e., Silver, Gray and Gold and could price at 999 Yuan (US$ 147 / Rs. 9810 approx.). Stay tuned as everything goes official at tomorrow’s launch event.