Xiaomi has scheduled a special event in China on June 25 where it will officially unveil the Redmi 6 Pro and Mi Pad 4, the successor of last year’s Mi Pad 3. Last week, the company announced two new smartphones in the Redmi 6 line – the Redmi 6 and Redmi 6A. There was also rumor of Redmi 6 Pro announcement at the same event, but due to some reasons the Chinese smartphone giant doesn’t unveiled it. However, as per the latest teasers from Xiaomi, the company will announce the smartphone in China on June 25. 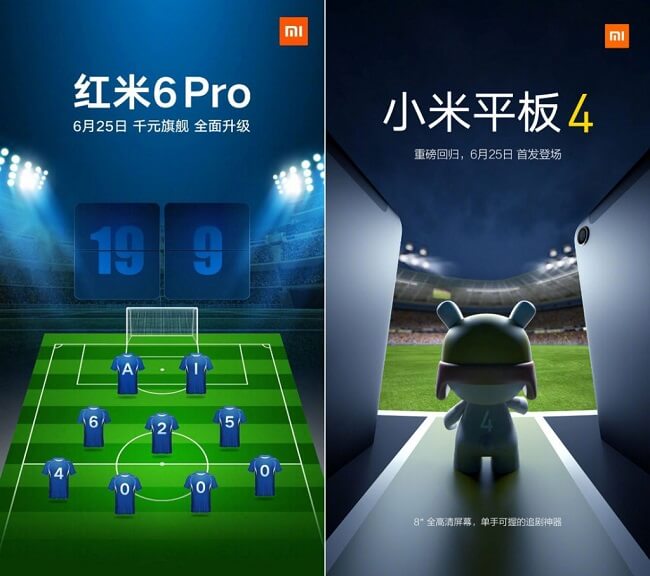 Following the latest trend, the Xiaomi Redmi 6 Pro could be first among the affordable Xiaomi smartphones to feature iPhone X-like notch. Before this, the company introduced notch-like design to its Mi 8 flagship series smartphones including Mi 8, Mi 8 SE, and Mi 8 Explorer Edition. The above teaser shows 19 and 9 numbers which hits at the notch-display with 19:9 aspect ratio.

Xiaomi doesn’t revealed anything about its upcoming smartphone, but the letters ‘A’ and ‘I’ on the teaser image suggests that the smartphone packs with some AI-based features. Below that, there is also number like 6, 2, 5 and 4, 0, 0, 0 which hits at a Qualcomm Snapdragon processor and a 4000mAh battery.

Considering the Mi Pad 4, the tablet is expected to come with an 8-inch FHD+ display, Octa-Core Snapdragon 660 SoC, and Android 8.1 Oreo based MIUI 10. It has single rear camera of 13MP sensor and a 5MP sensor on the front. It packs with a 6000mAh battery.

We’ll update with each and every detail about these devices once they go official on Monday. Source 1, 2, 3