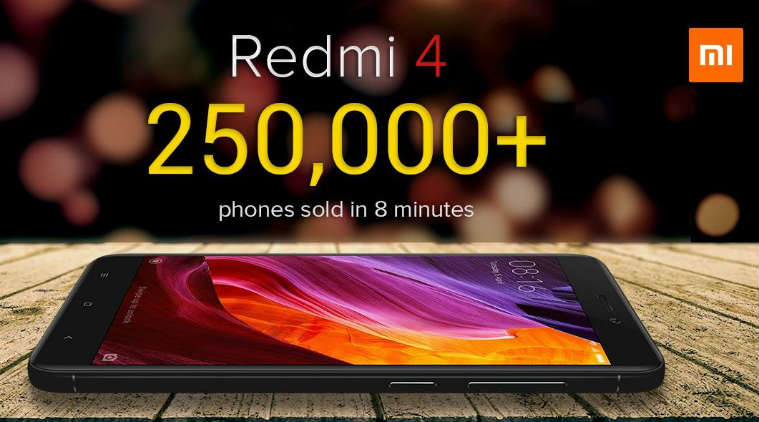 After a long wait, Xiaomi Redmi 4 finally made its way to Indian market last week. It was announced in three variants, with the price starting from Rs. 6,999. As scheduled, the Redmi 4 smartphone went on sale for the first time in India today exclusively on Amazon.in and Mi.com. Like every time, the latest mid-range device from Xiaomi has also seen tremendous response in its first sale in India.

According to the company, a total of 250,000 units were sold out in just 8 minutes of the sale on Amazon.in and Mi.com. This is the third time Xiaomi managed to sale 250,000 smartphones units of a particular model in the country within minutes on a single day. Earlier it reached this milestone during the Redmi Note 4 and Redmi 4A sale in India.

Howzat!! It’s a hat-trick! Redmi Note 4 followed by Redmi 4A and now Redmi 4. Can’t thank all you #MiFans enough for so much love! <3 pic.twitter.com/b8N3iFT4zy

Out of the three handsets, the Redmi 4A was seen going out of stock at the earliest time while Redmi Note 4 and Redmi 4 followed closely. The next sale of Xiaomi Redmi 4 is scheduled next Tuesday i.e. May 30.

To remind you about specifications & features, the Redmi 4 flaunts a 5-inch Full HD display and is powered by an Snapdragon 435 processor. It comes in three differe,nt storage variants – 2GB RAM + 16GB storage, 3GB RAM + 32GB storage and 4GB RAM + 64GB storage pricing Rs. 6,999, Rs. 8,999 and Rs. 10,999 respectively. It runs on Android 6.0 Marshmallow based MIUI 8 out of the box. Xiaomi at the launch event promised that a special MIUI 8 beta ROM based on Android 7.0 Nougat will be released to Redmi 4 users.

Have you ordered Redmi 4 in today’s sale? Let us know in the below comments.